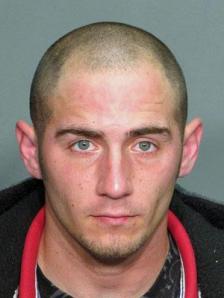 A Smithfield man accused of attacking a woman in her bed in Raleigh should be in a hospital, not a jail cell, his father said Monday.

Mitchell Dean Morrison, 25, of 4163 N.C. Highway 210, faces three counts of first-degree rape, first-degree sex offense and assault on a female. He is also charged with first-degree burglary, false imprisonment and assault with a deadly weapon, according to authorities.

Morrison is accused of breaking into a basement apartment on Park Avenue in Raleigh and holding one of the female residents at knifepoint while he cut, punched, slapped, raped and bit her.

After the suspect fell asleep, the victim ran into another room to get help from her roommates. She called 911 from the bedroom of a female roommate.

The victim said, although she did not know her attacker, he claimed he knew her.

“I don’t even know where this guy came from,” she said.

In an interview with WRAL News, the victim’s other roommate said he held Morrison at gunpoint until police arrived.

In his first court appearance on Monday, Morrison asked the judge to move him to a mental health facility at the Durham VA Medical Center.

Morrison’s father told WRAL News that his son served in the Coast Guard and was taking classes at Wake Tech to become a mechanic. He had a psychiatric appointment scheduled for Tuesday.

Morrison was being held under a $1.1 million bond in the Wake County jail on Monday. His next court appearance is Nov. 15.

everyone is claiming to have issues or being mentally ill now. esp after a crime is committed. everyone needs a drug to be normal and function. what is going on here?! more & more people are doping their kids up because of some sort of problem or another. has anyone for one second taken the time to think this over & wonder why things are going so down hill. this was an evil, hateful crime. my heart does NOT bleed for him. i hope this girl recovers and it doesn’t ruin her life.

Well, why didn’t you take your son to the hospital. No, he decided to go rape someone and now want folk to feel sorry for him. As Lt. Commander Russell Bowman said: “If he does not have a history of raping people in the past why would he be doing it now?” I wonder if he was ever accused of rape in the Coast Guard or raped someone in the Coast Guard and they were one of the 90+% of women than did not report rape?

If this is the case. . .then everyone who does this should be placed into a VA center. . .This is crazy that he is using this and making excuses for his behavior. . . Good thing that the UCMJ allows for the worst punishment to be able to be enforced. I say us it.

The father had the time to contact the media and inform them of his son’ “mental illness” but I guess he did not take the time to offer an apology to the woman that was raped. I’ll be keeping the victim in my prayers especially knowing how the Coast Guard is going to turn around and probably blame her. It’ll be a hard battle but keep on fighting! We are right behind you.

Beatrice, you are right. I believe that if you have a mental ilness then you have a responsibility and not an excuse. My heart and hopes are with the victim.

Hundreds of thousands of Americans are being treated for mental health issues at the VA and elsewhere but the majority of them are law abiding citizens that would never hurt another human being. Just because he is in treatment or has multiple mental disorders DOES NOT MAKE IT OKAY FOR HIM TO RAPE SOMEBODY.

just because he does not have a “criminal record” DOES NOT MEAN HE DID NOT COMMIT A CRIME IN THE PAST, it simply means he was never caught OR he was never prosecuted. Breaking into a house and raping someone for 5 hours straight IS the work of someone who knew what they were doing and most likely than not did it before.

I live in an older house and we have excellent insulation and sound proofing-just cause it is an “older house” does not mean you have paper thin walls. Most if not all houses that are 100 years old had some renovation work done to them throughout the year.

God bless the woman that was raped. On behalf of the Coast Guard I am sorry that we did not see this coming and let this ANIMAL out into the streets.

How can anyone justify a rapist behavior? I guess defense attorneys and men in the military do it all the time. Considering your grammatical errors I take it that you are the latter of the two.

Petty Officer Morrison should get the lube ready-Bubba is waiting for him in prison.

There is no excuse for what Petty Officer Morrison did. Lock him up and throw away the key! I feel sorry for the woman cause she has to live with this for the rest of her life.

“An estimated 26.2 percent of Americans ages 18 and older — about one in four adults — suffer from a diagnosable mental disorder in a given year” From those only a small percentage break into a home, viciously rape a woman, use a deadly weapon and if that was not bad enough he went on to bite her!

What I want to know is if this is another David Pierce case where women reported of sexual assault and the Coast Guard turned the other way only to have a Coast Guardsman go out into the community and do the same to a civilian and the civilian cops are taking it seriously.

I am friends with the victim and thank you all for the supportive comments. It means a lot to her and her mom. She is having extreme difficulties with her injuries and needs all of our prayers to pull through.

She never received an apology from this sicko or his dad. She was also told by the police that the sicko is in prison so Uncle Buck you have no idea what you are talking about. Take it from someone who knows the case far more than what the television and newspaper make mention.

The Coast Guard is already blaming her. Thanks for the heads up though. The people that run this website has been supportive. Thank you.

He was caught in the act-there is no denying what happened. He’ll be in the slammer for a really long time.

If you watched the WRAL story that aired on Monday evening, at the end of the story “The Suspect’s family sends out apologies and Prayers to the Victim and her family. Let’s not all assume and judge until we know all of the facts. And please remember These two people have families and are all effected by this tradgedy. May god be with us all at this time.

Do you really think that the victim is sitting at home watching TV to see the apology? It was a PR stunt and very tasteless to say the least. The victim been in and out of the hospital since and had severe reactions to several medication that is given to rape victims including some anti-viral medication to prevent HIV. She also haven’t stopped crying and shaking since the assault. The last thing she wants to do is to watch the news about her assault.

What happened to her is going to affect her for the rest of her life and I have absolutely no pity for the man that did this to her. He is very, very sick and deserves everything that is coming to him-Karma is a bitch.

Let punish Mitchell Dean Morrison in this life to the fullest extent of the law and then allow God to punish him for eternity in the after life.

As for the victim, what happened to her is a tragedy that I would not wish upon anyone. I will pray for her recovery. But, for people to sit here in judgement and to throw unsubstantiated accusations around does not help anyone.

There are at least two families that have been effected by this. Please try to have some compassion for them. Someday you might need some for yourself.

Peace be with you.

I would hope to one day raise my children to not grow up to be rapists. If god forbid they are born with a psychosis disorder that make them want to hurt others I would get them help before it is too late-and by getting them help I mean the earliest warning that they may hurt someone they are getting sent to the emergency psych. unit and yes under threats of hurting someone else you can be involuntarily sent to a psych. unit.

I have zero-pity for rapists as I also do not have pity for serial killers, pedophiles and terrorists.